News THE SHOWDOWN AT THE DASHARATH STADIUM AWAITS! 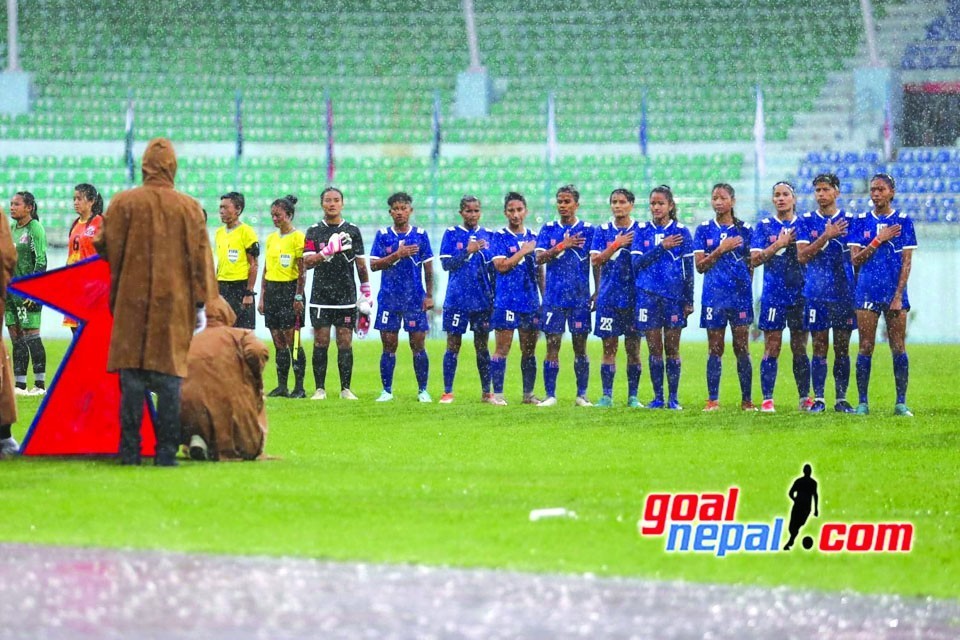 Tomorrow, at Dasharath Stadium, it can be a night when everything aligns. Or, more terrifyingly, it might be a night when the past repeats itself and flashes back to every previous iteration of the tournament. There are reasons, nevertheless, for the Nepali national women's team to believe that the former can transpire when they play India on Friday.

Going back three years to Biratnagar,  Nepal and India went to the Sahid Maidan for regional glory. The belief in the Nepali team was massive. The first time many of those players played in the SAFF Women’s Championship. As usual, India stood in Nepal’s way, breaking Nepali hearts in front of a packed stadium with 10,000 plus fans returning home heartbreaking.

The Indian ladies, as usual, went on to win the competition for the fifth time in as many editions while the Nepali women, who thought it would be their day, faltered. Nepal, coming so close, saw their fate handed to them, like in three of the four previous editions, except for the one in 2016 in Siliguri, where it was India again who put Nepal out of their misery, sending them home one step away from the final.

Coincidentally, it was Kumar Thapa, who will also lead Nepal tomorrow, that led Nepal in that semifinal loss in Siliguri. But the man has been given the responsibility to lead the side again, this time in the country’s capital. He keeps repeating, "We won't let the trophy leave Nepal this time," with his eyes fixed on the glory.

Although at home, this tournament was not smooth sailing even before it began for Nepal. Regular captain Renuka Nagarkoti fractured her collarbone weeks prior to the tournament and is on the sidelines cheering them on from the stands. After being given big responsibilities of leading the nation at home, new skipper Anjila Tumbapo Subba expressed her desire to lead the team to glory under her captaincy.

However, being drafted in a relatively uncompetitive group, the Nepali backline is yet to be tested. Nepal defeated Bhutan and Sri Lanka 4-0 and 6-0, respectively, to make their way into the semifinals. Anjila hasn’t had much to do with her gloves, and neither has the Nepali backline had much to deal with in the two matches so far. And to many, that seems to be the worry. Coach Thapa has said that the backline is ready to stave off the Indian attack and has trained well for that.

However, India won't be a pushover; let's face it. India know how to win football games, despite having just suffered a 3-0 humbling at the hands of Bangladesh. They have also demonstrated their strength against Pakistan and the Maldives. They probably didn't anticipate the amount of intensity Bangladesh put on from minute one to minute 90. However, India is in this tournament to win it, as coach Suren Chhetri and captain Ashalata Devi stated before the competition. And it hasn't yet escaped their control. India has been able to overcome Nepal in each of the previous five iterations of the competition. India are more than capable of defeating Nepal; thus the latter should be wary of its neighbors.

Three years on from that heartbreaking loss to India in the final, Nepal have the chance to topple the Indian side for the first time ever. Whenever Nepal play against India in women’s football, they always go out seeking revenge for the past. And it won't be any different this time. With a more cautious approach, the Nepali players can rise to the occasion, and Nepal can find themselves in the final for the fifth time, but for the first time in front of a roaring Kathmandu in their ears.

But if Nepal are to win here, they’ll have to take on the mighty challenge to be better than India, who are the tournament contenders and that loss to Bangladesh won’t change that fact. The Nepali players must be overjoyed at the prospect of the fans roaring for them. They have high spirits. Every Nepali on that side will need to show the best displays of their careers, and despite that, it might not be enough. But again, a man can dream, and a whole country will on Friday. Nepal against India, has the potential to become the biggest day in Nepali women’s national team history.

The rain gods might want their say on this one, but the fans won’t care for once, and neither should the players. The whole country will be on their side, roaring as ever, to create history.

THE SHOWDOWN AT THE DASHARATH STADIUM AWAITS!