Bangladesh Women's National Team have been crowned the champions of South Asia after defeating Nepal 3-1 in the final of the SAFF Women's Championship today in Kathmandu. Bangladesh bag their first SAFF Women's title courtesy of the win today. Srimoti Krishnarani Sarkar scored twice while Shamsunnahar scored one for Bangladesh in their victory. Anita Basnet scored one for Nepal.

Bangladesh had to suffer an early blow as Jahan Shopna, who was a doubt for today due to injury, was taken off in the tenth minute. But that turned out to be a blessing in disguise for Bangladesh.

Shamsunnahar, who replaced her gave Bangladesh the lead in the 14th minute. Masura Parvin's cross from the right-hand side was flicked into the net over by SHamsunnahar over Anjila Subba, Nepal goalkeeper.

Bangladesh doubled the lead in the 42nd minute. Sabina Khatun's through ball found Krishnarani Sarkar through on goal, who thumped the ball into the back of the net.

The match was eventful besides the goals as well. In the very first minute, Anjila spilled Krishnarani Sarkar's long ranger but she blocked the rebound. Just a minute later, Dipa Shahi's long-range effort was grabbed by Rupna Chakma at full stretch.

Saru Limbu's long-range effort in the 21st minute laid off by Preeti Rai from the edge of the box was blocked by the Bangladeshi centre-back. Anita Basnet's cross in the 24th minute was spilled by Rupna Chakma but no Nepali players couldn't get to the ball before Bangladeshi number one got to it.

Anita KC tried to curl one from the left in the 28th minute but Rupna caught that one easily. Nepal were awarded a free kick in the 35th minute at the edge of the box after Saru was fouled. Anita Basnet stepped up to take the free kick and Rupna came to Bangladesh's rescue again.

Nepal came close to the equalizer a minute later. Hira Kumari Bhujel's cross ricocheted to Preeti Rai's feet. She tried guiding the ball to the net but the ball was cleared off the line by Bangladesh.

At the very start of the second half, Nepal came close again. Amrita Jaishi's header off an Anita Basnet corner looped over the Bangladeshi goalkeeper Rupna and hit the crossbar.

Rashmi Kumari Ghising threw away a fantastic opportunity in the 52nd minute. An Anita Basnet cross found Rashmi free at the edge of the six-yard box but her header whiskered past the post.

Saru Limbu's through ball in the 68th minute was met by Sabitra Bhandari but Rupna Chakma came off the line to block Sabitra's shot.

Nepal pulled one goal back in the 70th minute. Anita Basnet finished off a shot from the right-hand side of the box after a layoff from Amisha Karki.

Nepal came close to the equalizer just two minutes later. Punam Jargha Magar flicked an Anita Basnet corner towards the goal but it went just away from the post. Bangladesh piled on misery in the 77th minute. Srimoti Krishnarani Sarkar added her second of the match to put the scoreline to 3-1. And that proved to be enough for Bangladesh for regional glory.

This was Bangladesh's second final in the tournament. Nepal have lost five out of six SAFF Women's Championships in the final after this loss. 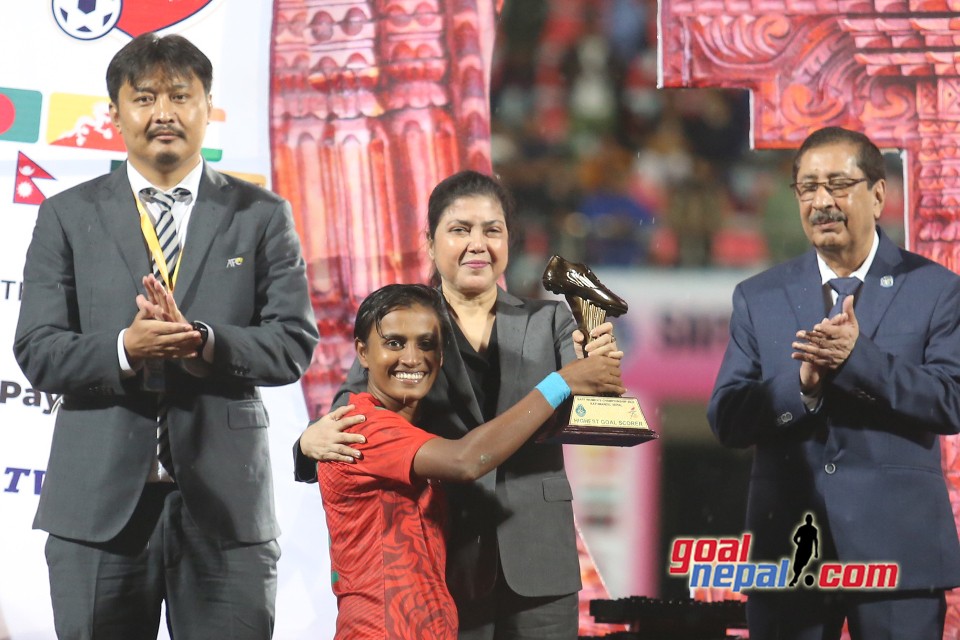