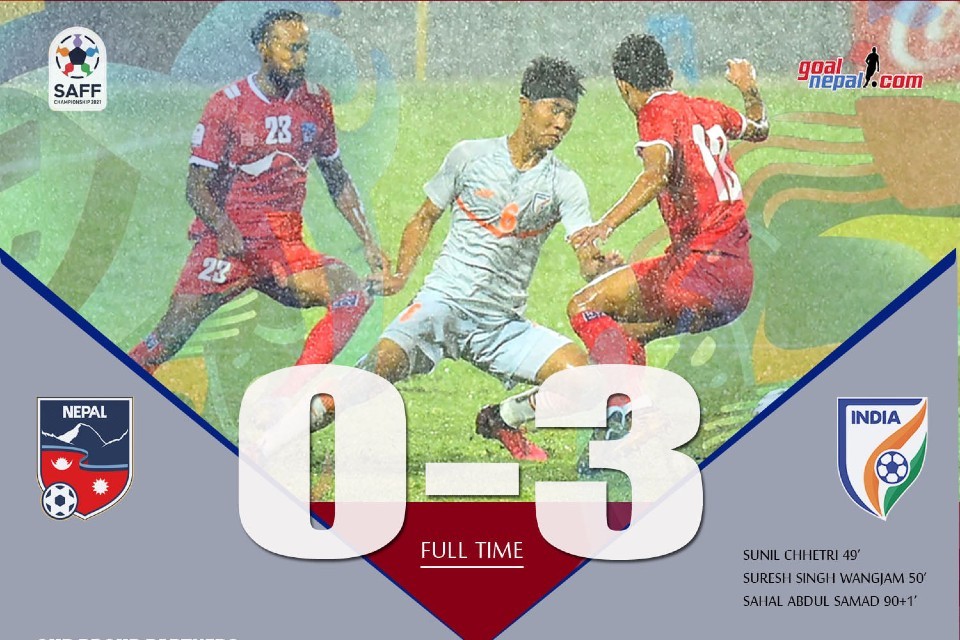 A minute. A minute was all it took for Nepal to let the title slip in the SAFF Championship final.

Nepal, who were eyeing history and looking for their first regional title have been beaten by India courtesy of goals from Sunil Chhetri, Suresh Singh, and Sahal Abdul Samad who clinch their eighth SAFF Championship title.

At the end of the first half, the score was 0-0 and the game was still alive. But at the start of the second half, Nepal lost their way and conceded two goals in quick successions.

In the 49th minute of the game, Sunil Chhetri ran from outside of the box to meet the cross of Pritam Kotal to head the ball from the edge of the six-yard box.

A minute later, Nepal gave away the ball in the middle of the pitch from which India capitalized and Suresh Singh netted India’s second with the help of a slight deflection from Dinesh Rajbanshi that took the ball away from Kiran Limbu.

The third goal for India came towards the end of the game when India no. 18 Sahal Samad danced through the dejected Nepali defense to put the ball in the back of the net.

Nepal missed two great chances in the first half but they looked blunt in the second half.

Nepal made a few substitutions after conceding two goals but couldn’t muster enough to score a goal.

Nepali coach Abdullah Almutairi will bid adieu to the national side after this match.