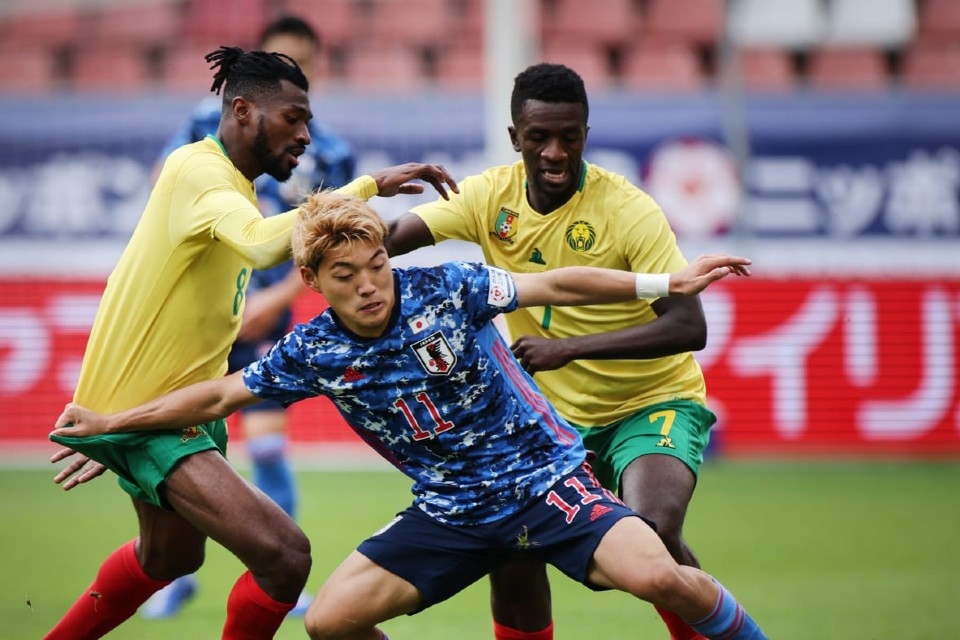 Captain Maya Yoshida had a header cleared off the line as Hajime Moriyasu’s Japan were held to a 0-0 draw by Cameroon in Utrech in the Netherlands in an international friendly on Friday.

Yoshida saw Ambroise Oyongo’s hook his goal-bound effort clear midway through the first half after a fumble by Cameroon goalkeeper Fabrice Ondoa in Japan’s first international outing in 10 months due to the ongoing COVID-19 pandemic.

The four-time AFC Asian Cup winners were represented by a squad selected entirely from players based in Europe, although injury issues had seen Moriyasu’s line-up weakened in the lead up to the game.

Shinji Okazaki withdrew due to a thigh injury while Yuto Nagatomo was also ruled out, meaning Koki Anzai started on the left side of defence and Yuta Nakayama joined Gaku Shibasaki as the midfield pairing in front of the back line.

It was Japan’s pressing from the front that had the Cameroon defence in difficulty in the opening exchanges, with goalkeeper Ondoa needing to react sharply to avoid conceding an early goal under pressure from both Takumi Minamino and Yuya Osako.

Of the two custodians, it was Ondoa who needed to be more alert in the first 45 minutes, the Cameroon keeper allowing Yoshida’s 23rd minute header to slip through his fingers before Oyongo’s clearance off the line.

Minamino, meanwhile, was carrying much of the threat to the African side as the Liverpool man twice hit the target in the first half, only for both efforts to be too weak to seriously concern Ondoa.

The Japanese continued to look the more likely to score in the second half, despite a tactical switch by Moriyasu that saw the Samurai Blue move from a back four to a central defensive three.

Osako should have done better four minutes after the break when substitute Junya Ito, a half-time replacement for Anzai, found him in space in the middle with a pinpoint cross, only for the Werder Bremen striker to send his header wide of the target.

And Frank Evina could have stolen the win for Cameroon in the dying minutes, but the Japanese were relieved to see his clever flick trundle wide of Shuichi Gonda’s right post.

Japan will play another friendly match in Utrecht on Tuesday when Moriyasu’s side face Ivory Coast as the Samurai Blue prepare for their remaining matches in the Asian Qualifiers for the FIFA World Cup Qatar 2022 and AFC Asian Cup China 2023 next year.