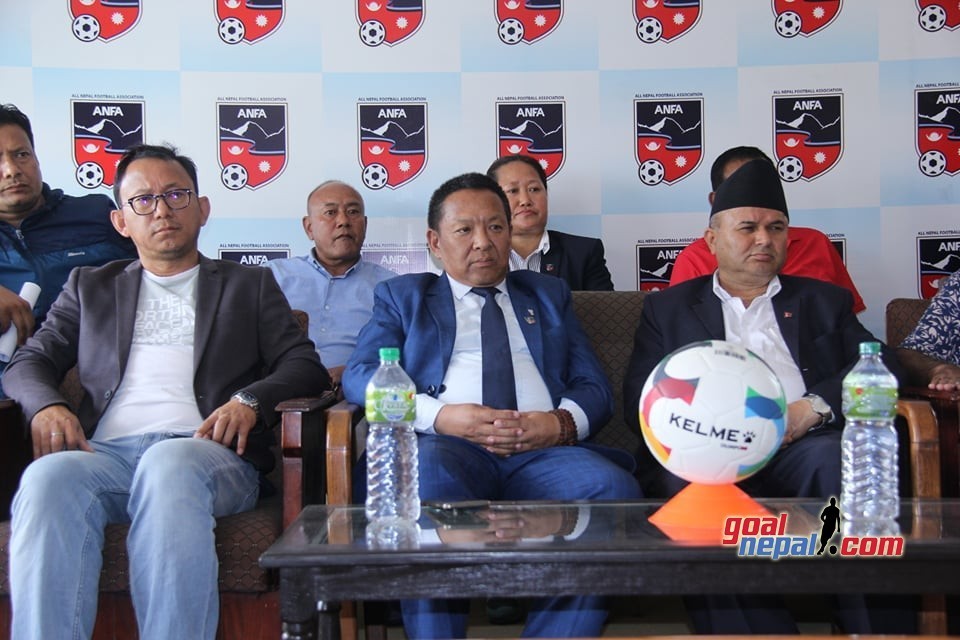 Although three candidates are in the fray,the contest for the coveted position is most likely to be between the incumbent ANFA President Sherpa and ANFA Senior Vice President Nembang.

The candidature of former President of Friends Club Paudel appears insignificant so far,but he can become a potential spoiler should the vote count between Mr. Sherpa and Mr. Nembang goes down to the wire Both Mr. Sherpa and Mr.Nembang announced their panels for the election several weeks ago. However, Mr. Paudyal has not made his panel public. It does not come as a surprise that both frontrunners vying for the ANFA presidency have packed their panels with familiar names. This is a reminder to all that the electoral general assembly (87 voters) elects a 21 member executive committee consisting of president, senior president, four vice-presidents, 15 members (two women) for a four year term.

In every election cycle candidates make lofty campaign promises and pledge their commitment to the overall development of football,which is standard practice today.But the bitter irony is that they fail to keep their promises. When they assume office,they are more preoccupied with private or personal interests and focussed on maintaining a position of power and influence for the most part. They hardly have time to address the core issues hindering the progress of football development. As a result, development priorities and organizational goals take a back seat.We have seen this happen time and time again in front of our eyes. Everyone agrees that ANFA has long been a hotbed of petty politics, corporate greed, corruption, political interference, power struggle,factionalism,bureaucracy controversies and hypocrisy.

Unfortunately,it continues to be so to this day. There always has been a lack of transparency,accountability, professionalism, good governance, sound management,honesty and responsibility on the part of people in authority. The root of the problem affecting Nepal football is ANFA.Long as the football body is governed by utterly incompetent, unprofessional, inept, corrupt and dishonest people nothing will ever change for the better.

An example of this is the Former ANFA President Ganesh Thapa who ran the organization like an authoritarian for over two decades.He fell from grace eventually, and the downfall was of his own making. When Mr.Thapa’s toxic leadership reached the saturation point, it was no longer tolerable and acceptable.

Mr.Sherpa and Mr. Nembang took matters into their own hands and initiated the” Save Nepal football” movement against Mr.Thapa. Mr. Nabin Pandey and former international Krishna Thapa were the other two key players as well. They succeeded in ousting him at the end after FIFA’s ethics committee banned Mr.Thapa for 10 years for bribery.

At the time both Mr. Sherpa and Mr. Nembang served on ANFA under Mr. Thapa's leadership. Let me remind readers that yours truly had fully supported the movement then. I have always been a proponent of strong leadership, sound management and good governance.And when someone in the leadership position fails miserably in his or her duties and responsibilities, I never hesitate to challenge the person regardless.

After Mr. Sherpa was elected as ANFA President, he faced the enormous challenge of taking Nepal football in the right direction. He shouldered high expectations and the football fraternity looked forward to positive and productive changes. Unsurprisingly, in no time,discontent,dissent and controversies surfaced within ANFA.

The departure of Mr. Nabin Pandey who held the position of International Relations Chief was a big blow to Mr. Sherpa. Mr.Sherpa and Mr.Nembang relation hit rock bottom as the former faced intense criticism for his leadership from the latter. Mr.Nembang has publicly criticized his boss for failing as a leader. He has painted him as the puppet president who is weak and divisive and accused him of financial irregularities, gross mismanagement, violating ANFA policies and catering to interest groups within and outside ANFA out of self-interest and fear.

Mr.Nembang and his panel ran their election campaign on a platform of transparency, grassroots level development, commitment,modernization and professionalism in Nepal football. He asserted that he has the vision, commitment, competency, boldness, ambition and honesty to change the face of Nepal football for the good. He also emphasized the need for a pragmatic and revolutionary approach to change the functioning of ANFA for the overall betterment and upliftment of football. On the other hand,Mr.Sherpa’s campaign slogan revolves around ceaseless change for institutional development of football, financial reinforcement and professionalism.

Their rallying point has been their achievements like Nepal’s outing in 30 plus international matches, renovationof ANFA headquarters,renovation of ANFA Academy in Dharan and Butwal and return to being in full operation and enforcement of financial regulations. Mr. Sherpa says his administration has achieved quite a lot on its mission to rebuild Nepal football despite very challenging circumstances.If elected for another term, he hopes to build on the progress of the past four and even go beyond. Going forward, his top priorities are infrastructure development, financial sustainability and youth football and league development.

The controversial and secret purchase of “Yarsagumba '', popularly known as the Himalayan Viagra, the recent dispute between the Kuwaiti Head Coach Abdullah Almutairi and players, mismanagement of the second edition of National Super League, failure to provide players decent accommodation and food during training camp speaks volumes about the maladministration and incompetence of Mr.Sherpa’s administration.

The electoral general assembly consisting of 87 voters must vote for the best substantive candidate with true leadership qualities, who is able to build trust and influence others to work together towards a shared goal and has ability to communicate,coupled with intelligence,integrity, honesty,humility, qualification and commitment to lead ANFA by example.

They have to vote his or her conscience.Voting for a candidate either along factional lines or based on personal preference or liking is irrational and a blunder. If they really care for Nepal football, they must rise above petty politics and vote wisely and intelligently for the most able,competent and deserving candidate.